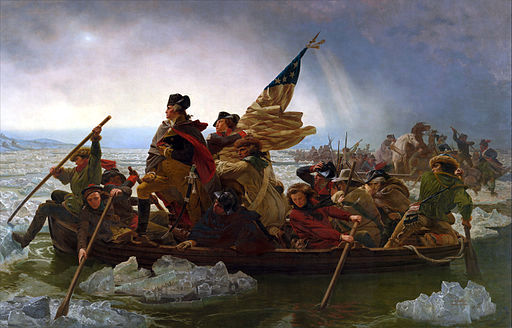 Christmas overnight, December 25-26, 1776. Rain turned to sleet, turned to ice, turned into a biting storm from the northeast. Who would brave a night like that with a poorly clad, hungry, tired army and the need to cross the ice-choked Delaware River? George Washington would.

The army was battle-weary and in bad need of personal supplies. Morale was low amongst the troops and the infant American nation. The British hired 30,000 Hessian troops to fight the Americans. Washington’s army was no match for this highly skilled group. The British, thinking they could easily take down the Americans, drank up in high spirits. One of their own put a note from a spy in his pocket that said the Continental army was advancing, but hey, tonight was a night to drink and be merry. He didn’t read the note.

Washington could not turn back because of the weather and because dawn would come. They would easily be spotted and defeated. So, using uncommon sense, Washington led his troops and turned around the morale and course of the War for Independence.

We Americans were born for independence as a nation and did not shirk back from doing the hard thing. That is our heritage. It’s in our DNA. On Christmas day each year at 1:00 pm eastern, there is a re-enactment of Washington and his troops crossing the Delaware River. People come. They come every year to see it.

Christmas Overnight, 1776. May we find the same mission-focused purpose of that Continental army, especially in these times.