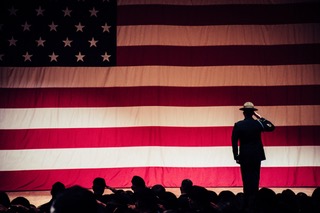 Take apart the government, take down the statues and monuments, and get a new national anthem. Sounds like an edition of Extreme Makeover, doesn’t it? It’s not a show. It’s the cultural revolution of our time.

Almost a year after I wrote about it, “The Star-Spangled Banner” is under attack again. They say it is racist. The slave in the song eventually became the free man of the last verse, (my favorite verse). I say leave the third verse there for our posterity and us as a reminder of this blight on our history, never to repeat it. Liberty and Justice for all have always been the goal, but the road is long to get there. It’s paved with human sin like war, anger, and hatred. Setting things right, not gaining power over others, is the noble and righteous goal for a government of, by, and for the people. We should never forget that.

Another complaint that is supposed to rile us up is that the national anthem was written to the tune of a British drinking song. A year ago, I wrote:

“Supposedly, the blame is placed on the shoulders of Francis Scott Key. Was he short of time or out of ideas, so he borrowed—wait for it—a British drinking song as a tune for his lyrics? Let’s set the record straight….

Know what a “contra factum” is? Sounds all medical, doesn’t it? Actually, it’s a musical term that denotes different song written to the tune of the same melody. Try this: Sing the “Alphabet Song. Now hum “Baa Baa Black Sheep,” and Twinkle Twinkle Little Star.” Got the idea? Same tune, different lyrics. “My Country’ Tis of Thee” was one of the predecessors of our National Anthem. It is to the tune of “God Save the Queen.” So there you go! “The Star-Spangled Banner” was written to the melody of “To Anacreon In Heaven,” a song that had 1 line referring to relations between 2 mythological figures: a god and a goddess. Here’s the repetitive line: “The Myrtle of Venus and Bacchus’s Vine.” That right there, fellow Americans, is the source of the accusation that our National Anthem is a former drinking song.

Francis Scott Key saw the U.S. flag waving over Fort McHenry at dawn during the War of 1812. You see, Key was a lawyer and former captive. He was negotiating the release of his friend, who was being held prisoner. When Key saw the Stars and Stripes waving victoriously over the Fort, he was moved to write the lyrics we sing today as our National Anthem.

It is amazing to me that one line could move an entire generation to put down the National Anthem by suggesting you and I are singing a drinking dirge.

Next time someone challenges your patriotism with an unpatriotic statement, take a moment to think it through. Don’t merely accept everything you hear. It takes only a moment to search for facts from trusted sources. Meanwhile, I’m going to continue singing “The Star-Spangled Banner”as a proud American.”

The land of the free and the home of the brave.

This is Common Sense Civics and Citizenship.??