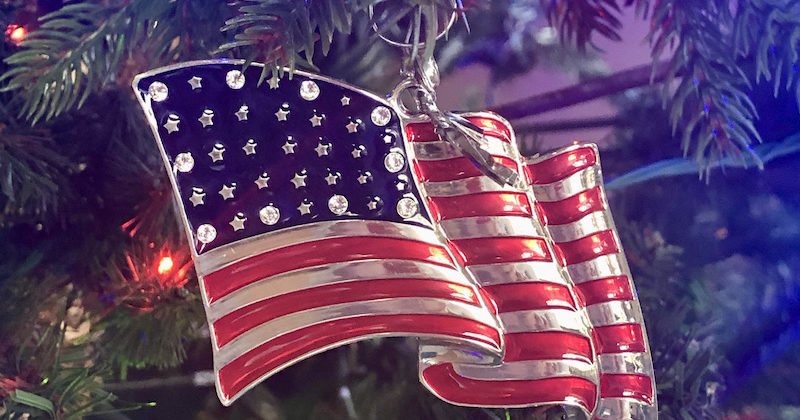 (Last year I was so moved by the story of the growing national organization “Wreaths Across America” and our fellow Americans’ patriotism, that I wrote about it. Readers to this page warmly received the information, so here is this year’s update. I was surprised to learn that without truckers donating their time, this beautiful tribute would not be possible. There are opportunities to be a wreath sponsor or to lay a wreath at the gravesite of one of our American heroes. I am participating by becoming a wreath sponsor. If you are interested in ways that you might help, read on, and be sure to check out the link below. The date for this year’s wreath-laying ceremonies at local and national cemeteries is December 17, 2022).

It’s truly a story of the American spirit. Born of one man’s desire to remember our fallen heroes, Christmas wreaths are placed on the graves of those who served. On Wreaths Across America Day, wreath-laying ceremonies occur at Arlington National Cemetery and about 3,500 locations in all 50 states, at sea, and abroad.

Morrill Worchester is the man who began this tribute. The official Wreaths Across America homepage tells his story (link appears below).

“Morrill Worcester, owner of Worcester Wreath Company of Harrington, Maine, was a 12 year-old paperboy for the Bangor Daily News when he won a trip to Washington D.C. His first trip to our nation’s capital was one he would never forget, and Arlington National Cemetery made an especially indelible impression on him. This experience followed him throughout his life and successful career, reminding him that his good fortune was due, in large part, to the values of this nation and the veterans who made the ultimate sacrifice for their country.”

This man’s surplus of wreaths in 1992 caused him to remember the fallen. What to do with the excess? His senator helped arrange for the wreaths to be placed in an older section of the cemetery where there are few visitors. People don’t usually walk to the remote parts of national cemeteries because it’s a long way.

I never ceased to be amazed at our incredible fellow Americans. Many of them were inspired in their youth by older Americans. Of course, we don’t hear about these stories as often as we should because good people doing good things don’t do them for recognition. They do it out of love. Every so often, their stories escape the shadows and become known. As volunteers lay the wreaths, they say the person’s name. While saying a person’s name is the sweetest sound to the living, but for the dead, it’s a way of keeping the promise to never forget.

The mission of Wreaths Across America is to :

your children the value of freedom.

May we all remember, honor, and teach in some way this holiday season.

If you would like to learn more or participate, here is the link:

This is Common Sense Civics and Citizenship.